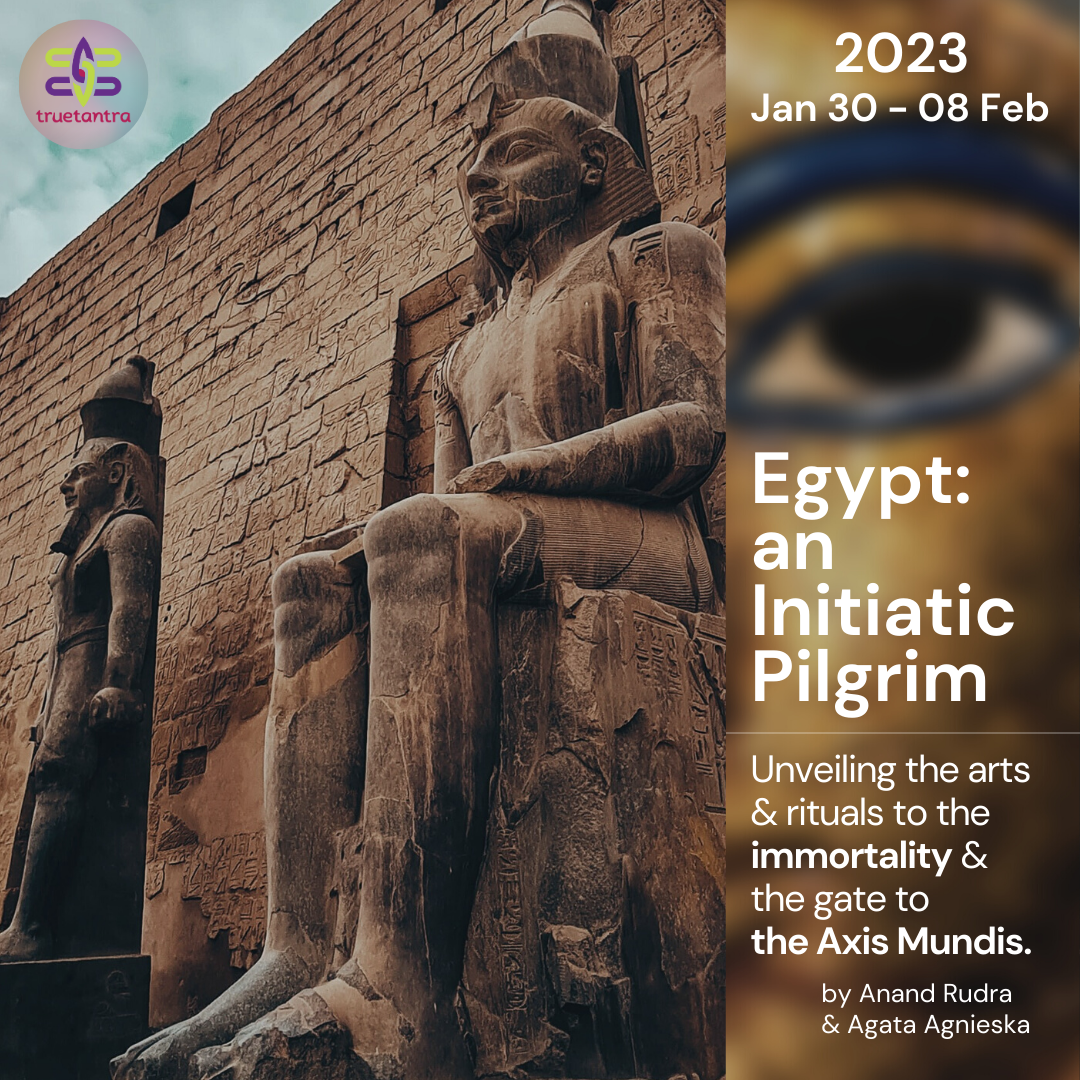 PRICES AND DETAILS OF PAYMENTS

THE PRICE DOES NOT INCLUDES:

The sages of Kamit (Ancient Egypt)  instituted a system by which the teachings of spirituality were espoused through a Temple organisation. The major divinities were assigned to a particular city. That divinity or group of divinities became the “patron” divinity or divinities of that city. Also, the Priests and Priestesses of that Temple were in charge of seeing to the welfare of the people in that district as well as maintaining the traditions and disciplines of the traditions based on the particular divinity being worshipped. the original culture of the Egyptians, which was a ‘shamanic’, tribal culture;

A famous form of mortuary cults is handed down by the Ancient Egyptians. The Egyptians fostered a very intense form of death cult because they were of the belief that the soul (Egypt. Ba) and consciousness (Egypt. Ka) frequently returned to the world of the living in attempt to guard and guide them. To hold the power of the soul and consciousness up eternally, the Egyptians erected shrines (so-called House-of-the-Ka) and mortuary temples, wherein they performed prayers and ceremonies over several dynasties. The mortuary cults for deceased kings were particularly costly and long-lasting. Early private tombs of the first four dynasties contained so-called slab stelas with the stylized depiction of the deceased, sitting on an offering table. The stela also presented inscriptions with the name and title of the deceased, together with lists of offering food and grave goods the deceased could magically use in the otherworld. Private tombs (especially mastabas) contained also so-called false doors, of which the Egyptians believed that the Ba, Ka and shadow of the deceased could use false doors as a portal between the world of living and the world of the dead. Additionally, in later times the Egyptians erected so-called Ka-statues with the name of the deceased on the base. Royal statues were richly decorated and oversized and every day mortuary priests performed ritual purifications on these Ka-statues.[3]

The ancient Egyptians believed in life after death and that the body was needed to house the Ba and shadow, whenever they would visit the world of the living. Thus, they used elaborate mummification and embalming techniques to preserve the body eternally. The special house for embalming was called in early times “where life endures”, in later dynasties it was called “beautiful house”. At first, the deceased was washed, shaved and then prepared for the “opening the body”. Embalmers made a cut in the left side of the torso to remove internal organs, the only organ left in the body was the heart. All removed organs were burnt in early times, from the late Old Kingdom onward the embalmers dried and put them in special vessels called canopic jars. The brain of the deceased was destroyed, removed and discarded, because the Egyptians didn’t know the functions and importance of the brain. The body was then covered in natron salts to absorb all moisture. After 40 days, the flesh would shrink, and the skin would darken, leaving only hair, skin and bones. The dried body cavity was stuffed with resins, sawdust and/or linen to give and keep shape. The whole body was then wrapped in many layers of linen bandages. During the process, priests placed magical protective amulets between the linen layers. The entire mummification process took about 70 days.[4]

Luxor temple is not dedicated to a cult god or a deified version of the pharaoh in death. Instead, Luxor temple is dedicated to the rejuvenation of kingship; it may have been where many of the pharaohs of Egypt were crowned in reality or conceptually (as in the case of Alexander the Great, who claimed he was crowned at Luxor but may never have travelled south of Memphis, near modern Cairo).

Corridor of Sphinxes (pictured above) — This long row of sphinxes is in remarkable condition. The avenue of the Sphinks ( Love & Marriage) https://discoveringegypt.com/luxor-temple/luxor-temple-sphinxes/

The Obelisk of Hatshepsut — This is the second biggest of all Ancient’s Egypt’s obelisks, rising almost 30m tall. Made out of a single piece of pink granite, for many this is the most impressive part of the temple complex.

Hypostyle Hall, the first room of the original Opet temple, with four rows of eight columns each, leading to the temple’s main rooms. The central chamber on the axis south of the Hypostyle Hall was the cult sanctuary of Amun,.The first is Amenhotep III’s ‘birth room’ with scenes of his symbolic divine birth. You can see the moment of his conception, when the fingers of the god touch those of the queen and ‘his dew filled her body’, according to the accompanying hieroglyphic caption.

The Sacred Lake — This is one of the most striking sights in Karnak. The small, rectangular lake was used in the priests’ rituals. The best thing about the lake is that it is completely calm, allowing it to perfectly reflect many of Karnak’s structures (this makes for some incredible photography).

The three other parts, the Precinct of Mut,

The Mut Temple — While much of the temple has eroded, there is still a sense of the original building’s considerable size. The statues of the lion-headed goddess Sekhmet outside the Temple of Mut are in various degrees of disrepair, but some are in remarkably good condition.

The Contra Temple — Considering its great age, this small temple is in reasonably good condition.

This temple is the largest ancient religious site in the world. It was the Vatican of its day – and four millennia after its heydays, continues to dwarf all other religious buildings. Here, we are confronted with the reason what has made Egypt so enchanting.

The word “amen” is at the end of many Christian prayers. Yet few Christians are aware that the word itself is a direct reference to the Egyptian god Amen, or Amun, the chief deity of Karnak.

the king communed directly with Amun, receiving the god’s divine power, renewal and life.”  The Egyptians considered their gods to be nearby, and living; they are not a distant god, unreachable by Mankind.

After breakfast, we will visit Karnak Temple, which represents the Solar Plexus. Karnak Temple covers a large area which includes several temples, the largest being the Temple of Amun. The essence of Karnak temple revives in a small sanctuary dedicated to Sekhmet, the lioness goddess of love and war. At Sekhmet’s enclave, you will experience the magnificent energies she offers.

Luxor temple describes the structure of the human body, incorporating its energy centers, the chakras.

3 temples Amun; Mortuary Temple of Ramesses III (The first pylon leads into an open courtyard, lined with colossal statues of Ramesses III as Osiris ) A gate to do a ritual for all the inner battles, Temple of Ay and Horemheb.

After breakfast, we will visit El Deir El Bahari, the temple of Hatshepsut on the West Bank. This is the funerary temple of the female pharaoh Hatshepsut — sunrise at this temple is magical. This temple in ancient times was known as the Holies of Holies. The site was chosen by Hatshepsut for its precise strategic calculations. It is situated not only in a valley considered sacred for over 500 years and to the principle feminine goddess connected with the funerary world, but also it sits on the axis of the temple of Amun in Karnak. The middle level of this three-tiered temple holds the chapels of Anubis and Hathor.

Next, we will visit the Valley of the Kings. This is the site of the burial tombs of the Kings of ancient Egypt which are decorated with scenes from ancient Egyptian mythology — it is as if they were painted recently. On our return to the hotel, we will stop off at the Colossi of Memnon, and we will have lunch before going back to the hotel.

The most beautiful of all the temples on the Nile, which is the sanctuary at Dendera — dedicated to Hathor, the goddess of love — naturally, this centre corresponds to the feminine Heart Chakra energy. And we would take a look at the simulation between the microcosmic and the macrocosmic in ancient times.

Dendera, in the temple of Hathor, we can find the steps of cell multiplication crafts on walls of the temple as a representation of DNA process being the overlay of the cosmos. temple is simply a manifestation of alchemical marriage “the soul of the God”. All symbols represent the calling of the state of blessing.

– Aswan is a major city along the Nile. It is considered the Root Chakra. The main god of Aswan is Khnum, the ram-headed god — the god of creation who sits at the potter’s wheel and forms individuals out of clay. When visiting Aswan, many people experience what is described as “a new birth” — it corresponds to the Root Chakra. We will take a ferry-boat to the temple of Isis on Philae Island and experience the beautiful feminine energy of this temple complex. Temple of Isis on Philae Island (Root Chakra) is the Cosmic alter and the raw essence of creation

and ofter that we will go on this celestial way towards the temple of Kom Ombo—the Navel or Sacral Chakra called the Initiation of Light Temple with its subtle masculine soul.